Note: the main text is taken from the ACPR report mentioned in the reference. This article aims to highlight some extracts from this report in order to better understand the essence of the study.

1.  ANALYSIS of financial risks due to climate change

From July 2020 to April 2021, the ACPR conducted a pilot stress test exercise on the impact of climate change (physical and transitional risks) on the financial risks of the financial sector. The exercise involved players from banking and insurance groups.

The horizon over which risks are assessed is 30 years and several scenarios have been implemented on different economic sectors in a dynamic vision of the balance sheets of financial institutions.  This work is part of the implementation of the fight against climate change and the promotion of energy transition and green growth, in line with the Paris Agreement in 2015.

This exercise to assess the financial risks induced by climate change will be repeated regularly. The next ACPR exercise is expected to take place in 2023/2024. 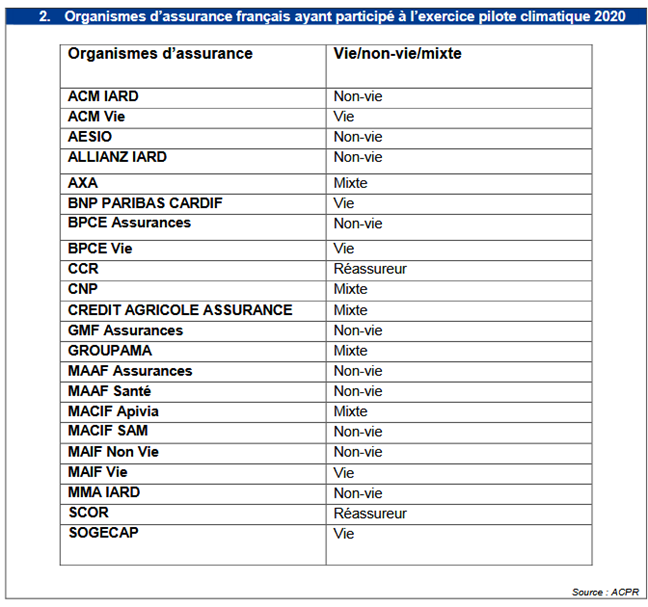 The reference scenario chosen by the ACPR is the most favourable scenario, although it is already based on a significant increase in the price of carbon, leading to major changes in the economy.

The first adverse scenario of a disorderly transition is that of a late transition. It assumes that the greenhouse gas emission reduction target is not met by 2030, requiring more aggressive measures to be put in place. It assumes that carbon sequestration technologies are less effective than expected in offsetting emissions.  It is based on the assumption that the price of carbon will rise sharply in 2030 in order to maintain the objective of carbon neutrality in 2050. The price of carbon rises from $14 per tonne of CO2 at the global level in 2030 to $704 in 2050. This increase results in a series of heterogeneous shocks on the sectors of activity and leads to a very strong increase in real energy prices (+125%) over this period in France.

The second adverse scenario of disordered transition is that of an accelerated transition. It combines a strong increase in the price of carbon, which reaches $917 per ton of CO2 in 2050, and a less favourable evolution of productivity than that assumed in the reference scenario from 2025. In addition, renewable energy technologies are less efficient than expected, which implies higher energy prices and additional investment needs.

The different results are shown below.

The dynamic balance sheet hypothesis allows institutions to make management decisions in response to the various scenarios analysed and to reallocate their business portfolio among the various sectors of activity from 2025 onwards. This hypothesis makes it possible to analyse the long-term strategies deployed by institutions.

The analysis focuses on credit risk projections under the different transition scenarios. The indicator used is the annual cost of credit risk.  The latter is calculated by dividing the total annualized provision flows for each time interval by the average of the exposures over that same time interval. The figures presented correspond to the aggregate of the 6 main French banks participating in the exercise.

The analyses tend to confirm that a disorderly transition (and even an orderly transition) has a significant impact on banks’ credit risk.  However, the magnitude of this impact appears to be smaller than that observed in the EBA’s biannual stress-testing exercises.  This is because none of the transition scenarios considered is accompanied by a decline in GDP, unlike the usual regulatory stress-testing framework. 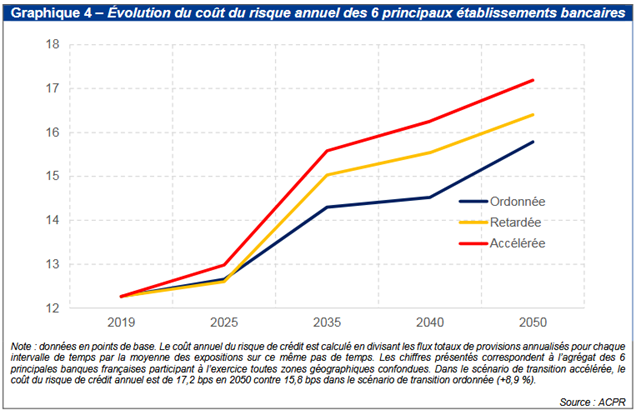 Sectors sensitive to the energy transition are represented by the sectors:

The sectors of interest in relation to the energy transition are represented by the sectors: 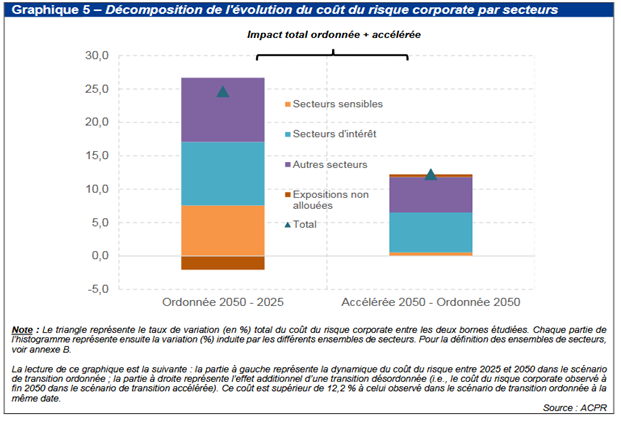 Note: The triangle represents the total rate of change (in%) of the cost of corporate risk between the two limits studied. Each part of the histogram then represents the variation (%) induced by the different sets of sectors. 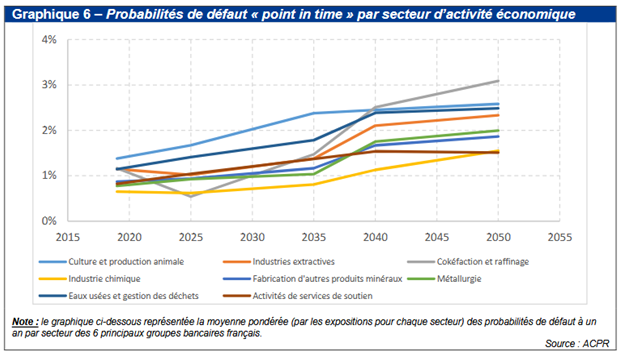 Note: the graph above represents the weighted average (by the exposures for each sector) of the on year probabilities of default  by sector of the 6 main French banking groups.

Market risk is the second category of risk for which banks project losses. It is broken down into two sub-categories: 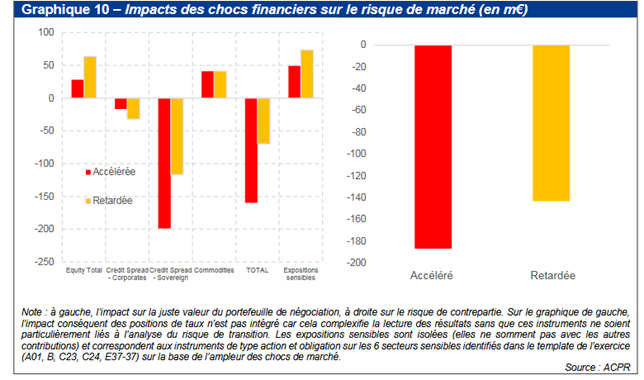 Note: on the left, the impact on the fair value of the trading book, on the right on the counterparty risk. On the left graph, the consequent impact of interest rate positions is not included because this complicates the reading of the results without these instruments being particularly related to the analysis of transition risk. Sensitive exposures are isolated (they do not sit with the others contributions) and correspond to equity and bond type instruments in the 6 sensitive sectors identified in the exercise template (A01, B, C23, C24, E37-37) based on the magnitude of market shocks

In the end, therefore, the pilot exercise reveals an overall “moderate” exposure of French banks and insurance companies to climate change risk.  However, this conclusion must be put into perspective in light of the uncertainties surrounding both the speed and the impact of climate change. It is also contingent on the assumptions, the scenarios analysed and the methodological difficulties raised by the exercise. Moreover, while this analysis does take into account sectoral interactions and the risk of a significant, even massive, devaluation of the price of certain assets, it does not take into account the risks of contagion, disruption of supply chains or amplification generally observed during episodes of tension or financial crises. These estimates are therefore a floor of the financial risks that may actually occur.  Finally, when interpreting these results, it should be borne in mind that the scenarios analysed do not lead to an economic recession by 2050, contrary to the usual practice of EBA stress tests, but, for the adverse scenarios, to lower growth in activity

3.1.   Analysis of the insurance sector

The physical risk studied in this exercise is based on the following assumptions:

The scenario assumes a temperature rise of between 1.4°C and 2.6°C in 2050.  This is the most pessimistic scenario retained by the IPCC. 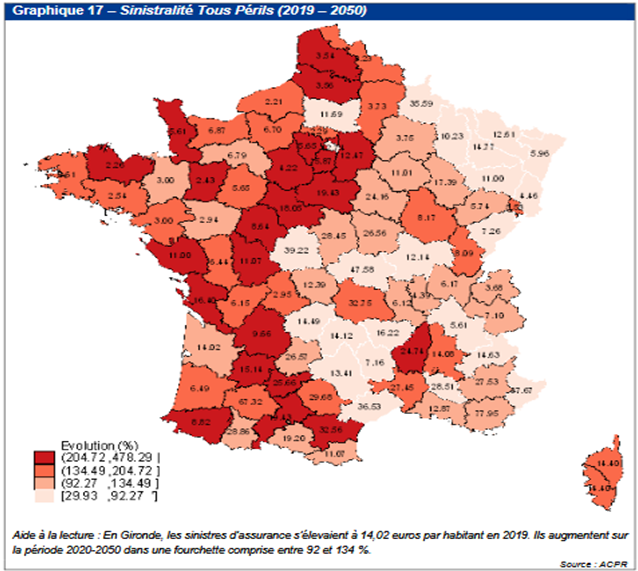 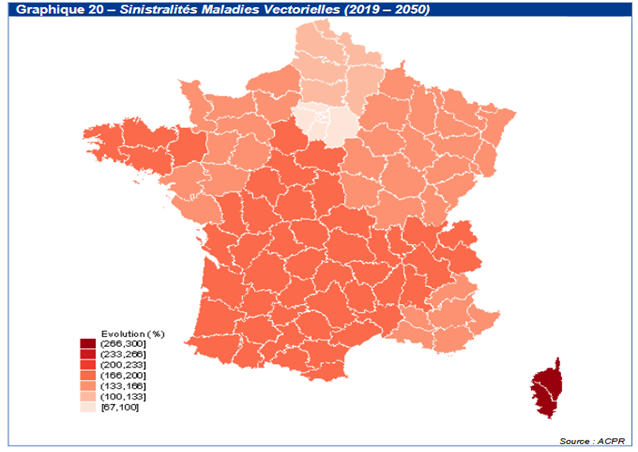 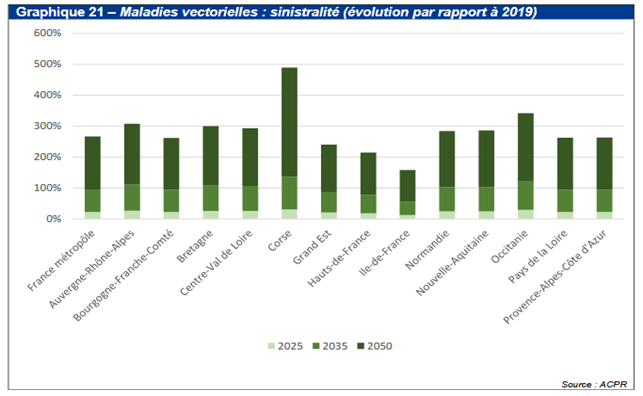 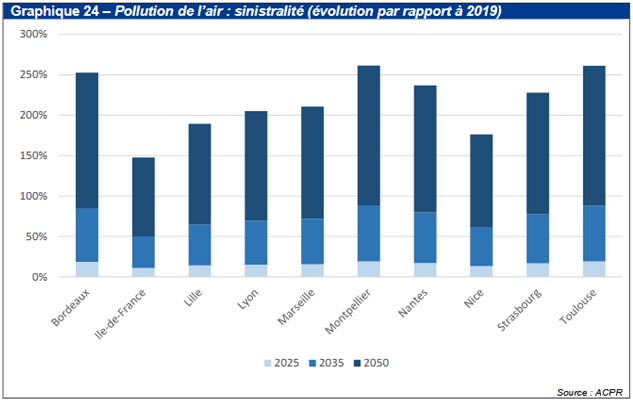 In addition to the operational risk generated by physical risk, banks have been made aware of two additional potential sources of risk.

The impact of a greater probability of occurrence of extreme climatic events (marine submersion, flooding and drought – which can impact property values with, for example, the swelling of clay soils) on credit risk, materialising in the depreciation of the price of the guaranteed property in high-risk areas and therefore a possible increase in the loss given default (LGD).  This effect is compounded for households by a possible increase in the probability of default (and LGD) if borrowing households’ insurance protection is reduced.

In addition to the transmission channels described above, institutions were asked to take into account the business impact of these events (business interruption, crop losses, supply chain disruption, etc.), which could lead to a decline in turnover and value added for risky counterparties, which could result in an increased probability of default.

4.1.   Overall encouraging results from the pilot

On the basis of the current balance sheet structures, it nevertheless appears that major efforts are required to contribute to a significant reduction in greenhouse gas emissions by 2050 and thus to contain the temperature dynamics by the end of the century.

The exposure of French institutions to the sectors most affected by transition risk, as identified in this exercise (mining, coking and refining, oil, agriculture, etc.), is relatively low.

Even if France is relatively spared in the IPCC scenarios, the pilot exercise shows that the vulnerabilities associated with physical risk are far from negligible.  Thus, on the basis of the information provided by insurers, the cost of claims could be multiplied by 5 to 6 in certain French departments between 2020 and 2050.

4.2.   the limitations of the exercise leading to nuances in the results obtained

However, this conclusion of the study must be put into perspective in view of the uncertainties concerning both the speed and the impact of climate change.  It is also contingent on the assumptions, the scenarios analysed and the methodological difficulties raised by the exercise.

The exercise revealed a number of methodological limitations that need to be addressed. The main areas for improvement identified by the ACPR relate to:

4.3.   The roadmap for financial institutions

Banking institutions and insurers must therefore step up their efforts to combat climate change today by integrating climate change risks into their financial risk assessment process, as these actions will contribute to observable changes in the medium and long term. This better consideration of climate change risk is indeed necessary to promote a better allocation of resources and ensure the financing of the transition.