Would compliance with the Paris agreements by 2050 be a powerful driver for changing the behaviour of players, including those in the financial world (banks, insurance companies and asset management companies in particular)?

At a time when the COP 26 is opening in Glasgow and the EU is seen as a “good pupil”[1], the ACPR/AMF report[2] offers us an overview of the commitments of financial players in the Paris financial centre, together with recommendations (p. 37). We will use this report to present the main elements and provide our analysis.

The energy sector currently accounts for three quarters of greenhouse gas emissions. To keep the increase in global temperatures to 1.5°C, the IPCC [3]indicated that the share of oil in primary energy supply would have to decrease by between -39% and -77% (between 2020 and 2050) and that of gas by approximately -13% to -62%.

To meet the Paris Agreements and achieve carbon neutrality by 2050, the International Energy Agency has drawn up a set of more than 400 measures[4]. One of the recommendations is to immediately halt all investment in new gas, oil and coal projects as well as in the installation of new coal-fired power plants not equipped with CO2 capture, use and storage techniques.

The ACPR/AMF report[5] thus makes it possible to link these various issues with the reality on the ground within the financial players in the marketplace (banks, insurers and management companies)[6].

2.   the role of internal policies: what developments?

The company’s policy sets the framework and commitment to addressing key climate issues.

The report confirms that banks and insurers have integrated into their policies requirements for the progressive exclusion of fossil fuel financing. Formalization has increased and some institutions have defined precise exclusion rules (see Annex 1).

However, the report also highlights the current limitations of the policies identified:

Thus, on the political side, although the players are keen to comply progressively, progress is still scattered and sufficiently disparate to reduce the comparability and appreciation of the systems in place.

3.   have fossil fuel exposures been reduced?

Given the first elements that stand out from the Policies, the exhibitions also suffer from the heterogeneity of the approaches.

In conclusion, the share of exposure, as currently calculated, reflects the very low share of activities related to the coal sector, significantly less than 1% of assets, with disparities between players

Management companies retain exposures above the GCEL threshold due to higher internal coal policy thresholds, even though companies are committed to exiting these sectors with a tightening of their coal policy.

The issue remains that of data quality and scope definitions.

In the approach that is developing around these climate-related issues, one cannot help but notice the similarity with other compliance topics such as AML/CFT. Even if the underlying issue is less criminal (and still, if we are to believe some), the evolution of the approach is close, which allows us to anticipate the main lines of the control framework that is taking shape.

4.1.   The importance of a procedural framework

The report on the state of policies illustrates the importance of establishing a clear policy within the institutions, which is then translated into procedures. The policies make it possible to :

The vigilance of institutions depends on their perception of environmental risks and the cost-benefit ratio.

Initially, institutions need references, predefined lists, and criteria to help them in this approach and limit the current heterogeneity.

As in the case of LCB-FT, where lists proliferate (List of non-cooperative third countries, list of Politically Exposed Persons, list of countries according to the corruption index published by NGO TI International, etc.), institutions use lists and expect others to adapt their risk-based approach (Global Coal Exit List [11]– GCE, Oil & Gas Exclusion List expected from NGO Urgewald, Trucost [12]Assessment, etc.). This will facilitate the homogenisation of approaches and thus comparability.

Obviously, whatever the external reference systems on which the institution relies, the system must be contingent on the activity of the financial player. Mapping allows for a control system that is proportionate to the issues at stake. The controls facilitate the identification of deviations from the Policy in the context of the various investments-financing-investments made.

The control system must be able to rely on appropriate skills. In the area of AML/CFT, former police officers have been recruited. Are we going to see the recruitment of former oil rig managers, fossil fuel specialists from large energy companies, in addition to those who have followed sustainable development-oriented courses?

Here again, the repository plays a key role, allowing the company and project to be scored according to the level of risk. It will serve as a support for controls and data analysis in order to produce statistics that will become more reliable. The issue of data quality remains an essential subject.

4.4.   An alert and escalation device

The system is based on scenarios (in connection with various studies published by the ACPR and the EBA, among others) that make it possible to define warning indicators. These indicators will gradually be incorporated into the suitability framework and will be subject to limits and a resilience threshold by 2030. Monitoring, for example, of exposures in relation to the GCEL list or the Global Oil and Gas Exit List (GOGEL) to be published soon (like the indicators used in this report) seems to be a first step to reflect the involvement of governance in these issues.

This will enable the governance bodies to ensure that the risk profile remains within the limits of their risk appetite for these subjects.

Financial players can no longer hide behind good intentions. The supervisor will not be slow to integrate, if necessary, these issues into the scope of sanctions ; maybe in the same way as other compliance issues. Risk management must integrate these issues into its risk-based approach in an appropriate and proportionate manner in order to monitor the quality of control elements. For the time being, the only risk indicators would be related to complaints from stakeholders. The main warning signals lie mainly in the analysis of the gaps between the announced policy and its translation into the daily decisions of managers. Clearly, the risk playground is limitless…

[5] On the basis of public information and detailed questionnaires sent to the largest players in the market (9 banks, 17 insurers and 20 management companies)

[6] We will only present here the main lines and some diagrams.

[7] This illustrates in particular the difficulty of clearly defining conventional and non-conventional hydrocarbons: issues that were not necessarily integrated into the financial employee’s past skills.

[8] The latter is responsible for 75% (according to the report) of the energy sector’s emissions. The coal policy must integrate thermal coal (mainly electricity) and metallurgical coal (especially that used to produce steel).

[9] As a reminder, indirect financing is generally not included in the perimeter.

[12] Trucost: non-financial rating agency. It rates companies according to their CO 2 emissions. It also works on their “water” footprint. 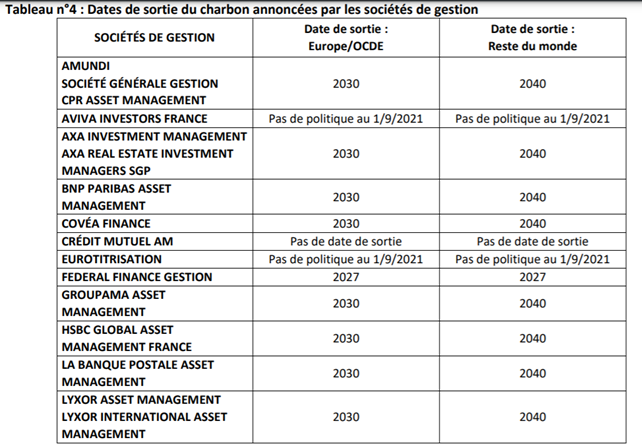 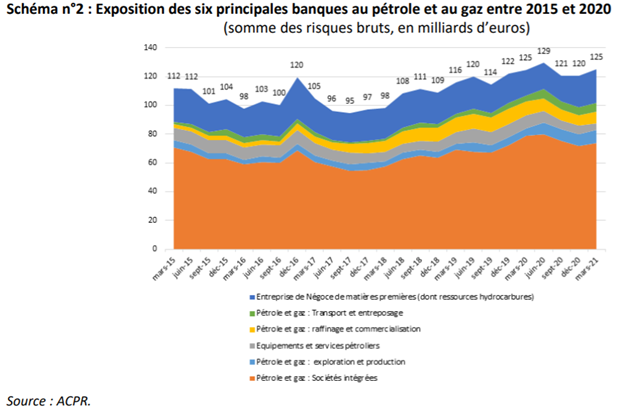